How to Do The Perfect Knuckleball Shot

Not a native speaker of the young chap in the video? Fear not – here’s an English text version

If you are an experienced soccer coach, then you for sure know the challenge that comes with getting your players to sneak the ball past the goalkeeper – especially from free-kicks.

A good goalie knows the predictability of a ball’s trajectory based upon its spin.  They are able to watch as it arcs through the air and will undoubtedly move to intercept it as it nears the goal.

The joy of a knuckleball kick is that the ball travels through the air with no spin at all.  It takes an odd path that is just as unpredictable to the goalie as it is to you.

This is the kick made famous by some of soccer’s best players (such as Gareth Bale & Ronaldo) and by following these simple coaching steps, you could soon have your players next shot on goal a perfectly placed knuckler that will find the net before you know it.

This isn’t something you’ll learn on a coaching course – so you’re probably better having a few goes yourself before you start coaching your players.

Knuckleball Step One:  The Run Up

Start 3-5 steps behind the ball and try to approach from a 35-45 degree angle.  As you approach you want to try stepping on your toes. Think that you need to be about 15-20 cm away from the ball and that your toes need to point in the direction of the intended kick.

The goal is to have the least spin possible on the ball.  You want to hit it just below the center to avoid any backspin or unnecessary height. 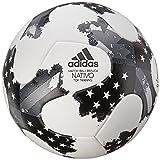 You want your foot to strike between the instep and the middle of the ankle joint.  Do your best to make your foot as stiff at the point of contact.

Avoid leaning back and keep your body either straight or leaning slightly forward in order to further reduce spin and to have greater control over the ball.

The goal of the knuckleball kick is that it has less spin. You need to rotate your kicking foot slightly outward and move your body in the direction of your strike.  After striking the ball, stop your leg immediately and take no more than one or two steps to settle your body.