Before we dive into the individual drills and games below, it’s important to understand the key coaching points behind each phase of this topic.

Although I have listed additional coaching points under each drill, when specifically coaching passing and receiving you’ll want to stick as closely as possible to following coaching points;

For all the drills below you’re going to need the following equipment; a set of training balls, cones and pinnies. Some training drills will require more equipment such as; goals and specific conditioning equipment. For these, I have listed these as additional pieces of equipment which you can find under ‘Setup’ in each drill description.

Product
Soccer Training Balls (Perfect Soccer)
Disc Training Cones (Profect Sports)
Training Vests (SportsRepublik)
Benefits
Balls go missing all the time. Make sure you always have at least one training ball to each child to ensure maximum amount of touches on the ball
Disc cones can be used to mark out training setups, be used as targets and help define the areas of any small side pitches you need
Always ensure you have plenty of training vests available. Training vests can not only be used to distinguish teams but can also be doubled up as tags, targets and flags
Essential for Every Training Session
Customer Rating
-
Prime
-
Price
Price not available
$19.95
$32.99
More Details
Buy on Amazon
Buy on Amazon
Buy on Amazon
Preview

Product
Soccer Training Balls (Perfect Soccer)
Benefits
Balls go missing all the time. Make sure you always have at least one training ball to each child to ensure maximum amount of touches on the ball
Essential for Every Training Session
Customer Rating
-
Prime
-
Price
Price not available
More Details
Buy on Amazon
Preview

Product
Disc Training Cones (Profect Sports)
Benefits
Disc cones can be used to mark out training setups, be used as targets and help define the areas of any small side pitches you need
Essential for Every Training Session
Customer Rating
Prime
Price
$19.95
More Details
Buy on Amazon
Preview

Product
Training Vests (SportsRepublik)
Benefits
Always ensure you have plenty of training vests available. Training vests can not only be used to distinguish teams but can also be doubled up as tags, targets and flags
Essential for Every Training Session
Customer Rating
Prime
Price
$32.99
More Details
Buy on Amazon
[wpsm_titlebox title=”Passing and Receiving Soccer Drill #1″ style=”2″] For this drill all you’ll need will be markers of some kind (eg cones) and enough space for each line of players
‘Turn or Play’ is small easy to setup drill that improves passing and receiving techniques but also creates a positive learning environment where communication is the key ingredient.
Suitable for; Under 8’s, Under 9’s, Under 10’s, Under 11’s and Under 12’s. Can also be used with older players – ability depending

Turn or Play is a really quick setup and takes up minimal room as you can line up players in their groups vertically to each other.

Turn: If the passer (Player A) calls ‘Turn!’

The receiving player in the middle turns to receive the ball, controls, and uses a turn of their choice (eg cruyff turn) then plays the ball into Player C. Player C then dribbles the ball back to the start position. Player B Replaces Player C and Player A now becomes the receiver.

Play: If the passer calls ‘Play!’ Player B turns to receive ball, plays it into space where Player A runs onto it and passes it to player C. Again Player A becomes the new receiver and B replaces Player C. Again, for this passing and receiving drill, all you’ll need will be some cones and possibly some pinnies to identify player B in the progression
This practice drill develops passing, control and the ability to be aware of the space around them to run into after they have passed the ball
This warm up drill can, and should be used will all age groups. For younger age groups (Under 7’s-Under 12’s) it can be used as a standalone drill. For older age groups (Under 13’s – Under 16’s) you could use it as a warm up drill.

The name of this drill is come from the triangle ‘formation’ of the players in a squared box. (Drill #1. This simple drill requires 3 players, 1 ball and enough space to create a small box.

For the progression: 4 Players/2 balls. Super simple setup with 4 cones creating a square box.
To improve players receiving and passing in a dynamic way
Under 7’s, Under 9’s, Under 10’s

Make sure you have enough room to accommodate all your players. This drill involves passing the ball, taking a touch to the outside of the cones before playing the ball back. This is repeated until you decide to progress the drill or stop to re-enforce some coaching points. If you’ve got access to a center circle at training then I recommend you use that. Failing that, this drill will work just as well using cones to set the perimeter to form a circle OR a squared area.
To develop and further improve passing and receiving techniques
This is good drill to use with most age groups (Under 7’s – Under 15’s).

You’ll see this drill (or variations of this drill) at nearly every academy, youth club and soccer training facility – and for good reason. It has all the hallmarks of a good drill; simplicity, effectiveness and maximum participation.

The Simple Circle involves having enough players on the outside of a circle to feed the balls to the players on the inside of the circle. The players on the inside must receive the ball into space, dribble the ball and then pass the ball to another player on the outside of the circle. This drill is highly effective for not only helping your players improve their passing technique but also develop an understanding of receiving priorities in ‘passive competitive’ environment. Make sure all players get enough practice time. The focus should be on the quality of the passes and the speed and efficiency the receiving player can control the ball and play it to the next player. For this progression; Normal rules as per the previous setup but this time add in 2 coned gates to either side of the area. 1 player stands on each side and when they receive the ball from Player C, they must control the ball, turn and dribble on to the opposite end. Player C still follows their pass but only half way until they receive the ball. 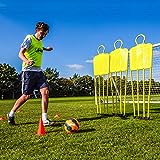 5 Reviews
FORZA Soccer Mannequins
Soccer mannequins are a great addition to most soccer drills. Soccer Mannequins can be used to for; defender simulation, free kick practice, targets and even as make shift soccer goals. While you don't need to have as many as the drill setup above suggests, having 4 or 5 in your equipment lockup will allow your sessions to not only look more professional but create more realism too.
$85.99
Buy on Amazon
This drill involves 8 players; 4 players either end of the box and 4 players inside the box. . To make this drill as realistic as possible I’d recommend grabbing a set of soccer mannequins. Other than that you’ll need a fairly big surface area for this drill – around 40 x 40 marked out using cones. I’d also recommend using different colored pinnies for each group
To develop their passing and receiving skills whilst making use of other areas of play such as switching the play and positional awareness.
This drill might a little to complicated for the really young age groups to grasp straight away. So I’d recommend using this drill with Under 9’s, Under 10’s, Under 11’s, Under 12’s, Under 13’s and Under 14’s

The players in the box work in pairs – passing, receiving and moving as they work their way up and down the box. Once they reach the end of the area, they play the ball to the nearest outside player (in this case player C) who then plays it to player D. Player A gets into position to receive the ball and they start again working their way down the box to the other side. The other 2 players inside the box do the same thing in the opposite direction.

This drills starts by the players passing the ball into the middle (Player A to Player B) and following their pass to the next cone. The player receiving the ball (Player B) turns, and plays the ball to the next player (Player C) and also follows their pass. The final player to receive the ball (Player C) dribbles back down with the ball and joins the back of the other line. Both lines complete this pattern simultaneously. For this progression your players are looking to pass and receive the ball while improving their awareness and timing of their runs. This is a continuous passing drill that requires, good accuracy, weight of the pass as well as continuous communication to ensure the drill doesn’t break down. Players have a choice of either passing to the man in the middle OR the player on the outside. When passing to the player in the middle you call ‘TURN‘ and and take their place while the other player plays the ball out to the other side and take up their new position. If you pass to the outside you call ‘One-Two‘. Setup a cone gates in a about a 40 x 40 squared box. Ensure each gate is positioned to encourage the first touch. Only cones will be needed for this drill
Helps to develop passing and receiving skills while working on their first touch
Under 7’s, Under 8’s, Under 9’s, Under 10’s, under 11’a, Under 12’s

In this simple setup you’ve got 4 players and one ball. Player A starts by passing the ball into player B. Using their right foot to control the ball through the gates they then play the ball to player C who does the same and this drill continues. Try to encourage using two touches one; one touch through the gates using the right foot then one touch for the pass on to the next player This drill / game encourages your players to make the right decision – quickly. There are 4 players. 3 of them have a number each. The other player must make the right decision. Start with Player 1 playing the ball into the ‘Decision Maker’ as they pass the ball in they must shout a number between 1 and 3. Whatever number they shout the Decision Maker must play a pass to that number without controlling the ball (one touch pass). The new player with the ball then repeats the process.

Timing of The Pass The aim of this game to develop your players understanding of when to pass the ball and their overall game awareness. There are 2 groups of players. Group A pass the ball to each other while Group B dribble the ball through the center.

link to How to Get a US Soccer Coaching License?

Youth and recreational soccer coaching require little to no experience, and it usually starts on a volunteer basis. However, as you climb the ladder up the soccer ranks, there will be a point where...

Continue Reading
link to 14 Tips for Coaches on Game Day

I have attended many soccer games throughout my career and I have learned a lot from the school of hard knocks. In this post, I want to share some of the tips I have learned from experience, as well...